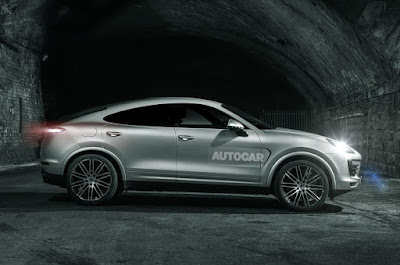 Porsche Engineering have revealed they are working on a torque control system for a next generation four-motor all-wheel-drive electric SUV powertrain that provides maximum stability and safety in every situation—without additional sensors on board.

What makes a four-motor powertrain desirable isn't so much more power, but more control. Each motor can be controlled individually and immediately, rather than relying on analogue mechanical differentials and inefficient hydraulic braking systems that don't react as fast or as precisely. Solid state digital control is good for safety and stability in inclement weather and for improved performance and handling in dry weather. Basically, it's the most high performance, responsive, adjustable and energy efficient torque-vectoring system possible.

An electric all-wheel-drive vehicle with multiple motors has a fundamental advantage over gasoline or diesel engines: The front and rear axles, indeed all four wheels, have their own electric motors, enabling extremely variable distribution of the drive power. “It’s almost as if you had a separate gas pedal for each axle or wheel,” explains Ulf Hintze of Porsche Engineering.

In a possibly related development, Porsche recently increased their ownership stake in Rimac to 15.5% following their 2018 investment for 10% of the business. Rimac developed a quad motor all-wheel-drive torque vector system for their Concept One hypercar.

The e-tron SUV concept unveiled by sister company Audi back in 2015 was originally intended to be powered by three electric motors. Unfortunately the dual motor rear eAxle didn't make it into the production version.

Thanks to variably distributable drive power, electric vehicles with separately powered wheels can remain stable even in critical situations— as long as the torque control reliably detects deviations from the target state and reacts immediately. Porsche Engineering has developed and tested a solution for e-SUVs that does precisely that. Without additional sensors— entirely through software.

It’s a situation that every driver dreads: a snow-covered road, a surprisingly tight corner, and barely any time to brake. With a normal vehicle, a dangerous loss of control is an all-too-real possibility. The rear could swing out, causing the car to spin and land in the ditch. Yet in this test, everything goes differently: The driver turns and the SUV steers confidently into the corner—without even slowing down. A glance at the speedometer (80 km/h is the reading) removes all doubt that this is no ordinary vehicle. The SUV being tested in this wintry environment is an electrically powered all-wheel-drive vehicle with four motors— one for each wheel.

Until now, this drive technology was seen only in Mars rovers, but now it has reached the everyday world: Porsche Engineering recently developed a torque control system for electrically powered series SUVs. It was truly pioneering work. “We had to develop a lot of it from the ground up,” says Dr. Martin Rezac, Team Leader for Function Development at Porsche Engineering. There was also an additional challenge: The driving characteristics had to be optimized exclusively through software. The Porsche engineers could not install any additional sensors and had to use the existing control devices. The task, in short, was essentially driving stability by app.

An electric all-wheel-drive vehicle with multiple motors has a fundamental advantage over gasoline or diesel engines: The front and rear axles, indeed all four wheels, have their own electric motors, enabling extremely variable distribution of the drive power. “It’s almost as if you had a separate gas pedal for each axle or wheel,” explains Ulf Hintze of Porsche Engineering. In a conventional all-wheel-drive vehicle, there is just one engine at work, whose power is distributed to the axles through a central differential. As a rule, the torque ratio is fixed: one-third up front and two-thirds in the back, for instance. The ratio can, in theory, be changed, but additional mechanical gadgetry is required for that (multi-plate friction clutch), and it works rather sluggishly. In an electric vehicle, by contrast, the torque is purely electronically controlled, which works considerably faster than mechanical clutches. Every millisecond, intelligent software distributes the forces in such a way that the vehicle always behaves neutrally.

And Porsche Engineering developed just such a torque control system for all-wheel drive SUVs. The software can be used for different constellations and motor configurations—for other electric vehicle types as well, of course. In general, development begins with the base distribution, i.e. software that controls how much power is transmitted to the front and rear axle, respectively. For straight-line driving and balanced weight scenario, for example, a 50/50 distribution would make sense. If the driver accelerates, the software switches to full rear-wheel drive—or all frontwheel drive around a sharp bend. “This makes the vehicle noticeably more stable, even for the passenger,” says function developer Rezac. As the optimization is achieved entirely electronically, theoretically it would even be possible to offer the driver various different configurations: one mode for sports car sprightliness, another for smooth cruising.

The second task of the control software is to adjust the torque to the wheel speed. The algorithms follow a simple objective: All wheels are supposed to spin at the same speed. That’s easy to accomplish on a dry freeway, but it is considerably trickier when driving on a snowy mountain pass. If the front wheels encounter an icy patch, for example, they could—without electronic intervention—start spinning. But the torque control system detects the suboptimal situation immediately and directs the torque to the wheels that are turning more slowly and still have grip within fractions of a second. There is something similar in the world of combustion engines—the speed-sensing limited-slip differential, also known by the brand name Visco Lok. In this component, gear wheels and hydraulics ensure that no wheel turns faster than the others. But mechanical solutions are slow. In an electric SUV, by contrast, software assumes the role of the differential— with much swifter reactions and naturally entirely without wear.

The third and most important function of the torque control system lies in its control of lateral dynamics, i.e. the ability to neutralize critical driving situations like the one mentioned at the outset: a slippery surface, a tight corner, and high speed. An uncontrolled vehicle would quickly understeer in this situation. In other words, the driver initiates the turn, but the vehicle slides in a straight line without slowing down. The control software in the e-SUV immediately puts an end to understeering. In a left-hand turn, it would brake the rear left wheel and accelerate the right one until a neutral driving situation was restored. The system takes similar measures when oversteer occurs (rear end swinging out). The driver, meanwhile, ideally notices nothing of these interventions, because the torque control system acts very subtly and quickly. “It feels like driving on rails—an SUV behaves with the agility of a sports car,” says Hintze, summarizing the effect.

The driving state observer (shortened to simply the “observer” by the engineers) is involved in all intervention decisions. This software module continuously monitors a variety of factors: how forcefully the steering wheel was turned, how much the driver is accelerating, and how much the vehicle is turning around its vertical axis. The data is provided by a yaw sensor. This actual status is compared with a dynamic model of the vehicle that represents the target state under normal conditions. If the observer detects deviations, for instance due to oversteer or understeer, the software intervenes. If the vehicle is not turning into a corner as quickly as would be expected from the current steering wheel position and speed, individual wheels are selectively braked until the direction is back on line.

The same effect may be achieved by a conventional electronic stability control (ESP) system as well—but in an electrically powered all-wheel-drive vehicle, the safety system can do more: While a conventional ESP system only brakes, in an electric vehicle the individual wheels can be accelerated as well. This “pulls” the vehicle back onto the right track without losing speed. The intervention is also less jerky than in a hydraulic ESP system; the typical juddering familiar from anti-lock brake systems is omitted.

“The development of the vehicle observer was the biggest challenge,” says Rezac. The fact that so much development work was required here goes back to a fundamental problem: A car knows relatively little about its own state. It doesn’t know its own speed; it can only derive it from the speed of the wheels, which is difficult on ice and snow particularly. The observer therefore has to use additional information about the longitudinal and lateral acceleration in order to estimate the speed. The information regarding weight distribution is equally vague. While the suspension does capture the load on the individual wheels, even this information provides mere clues rather than certainty. If the shock absorbers report increased weight on the rear axle, for example, it could be due to the vehicle being parked on a slope—or simply being heavily loaded.

The data situation is decidedly meager. And because the client insisted that no additional sensors could be added, the SUV project called on the creativity of the software developers. “The observer has to estimate the vehicle’s important parameters,” explains Rezac. Some unusual data sources are brought to bear: The torque control system communicates with a sensor that detects the inclination of the car, for example, which is usually used for the automatic adjustment of the headlights.

The entire software package not only had to be developed, but calibrated in real test drives. And all that in a very short period of time: There were just two winters available in which the fine-tuning could be tested on a frozen river. It emerged, among other things, that the great advantage of electric motors—their rapid reaction times—sometimes resulted in undesired side effects. “The electric motors respond so quickly that vibrations can occur,” reports Hintze, who conducted the test drives with his team. In a few situations the software transfered the torque between the axles at increasingly fast intervals, which resulted in an audible revving of the motors. Thanks to close collaboration between the calibration team and the development team around Martin Rezac, however, they quickly managed to put a stop to this build-up through a modification of the software.

This detailed work is exactly where the challenge lies in such projects. As the software is to be used in a series vehicle, it has to be tested for every imaginable situation, no matter how improbable it might seem. If the sensor reports faulty data, for example, the torque control has to decide if it is still allowed to function even without the data source or should be switched off. Another hurdle was posed by the limits of the electric drive technology. It may be the case, for example, that individual e-motors cannot transmit the available battery power. The function developers had to take such limitations into account. “The control range collapses in this case,” says Hintze. Instead of 100 percent torque on one axle, perhaps only 60 percent might be available. And the torque control has to take that into account as well. But all involved are convinced: The pioneering work was well worth the effort, as electric vehicles with up to four motors will soon shed their exotic reputation. And many drivers will be grateful that they can drive through the snow as if on rails.