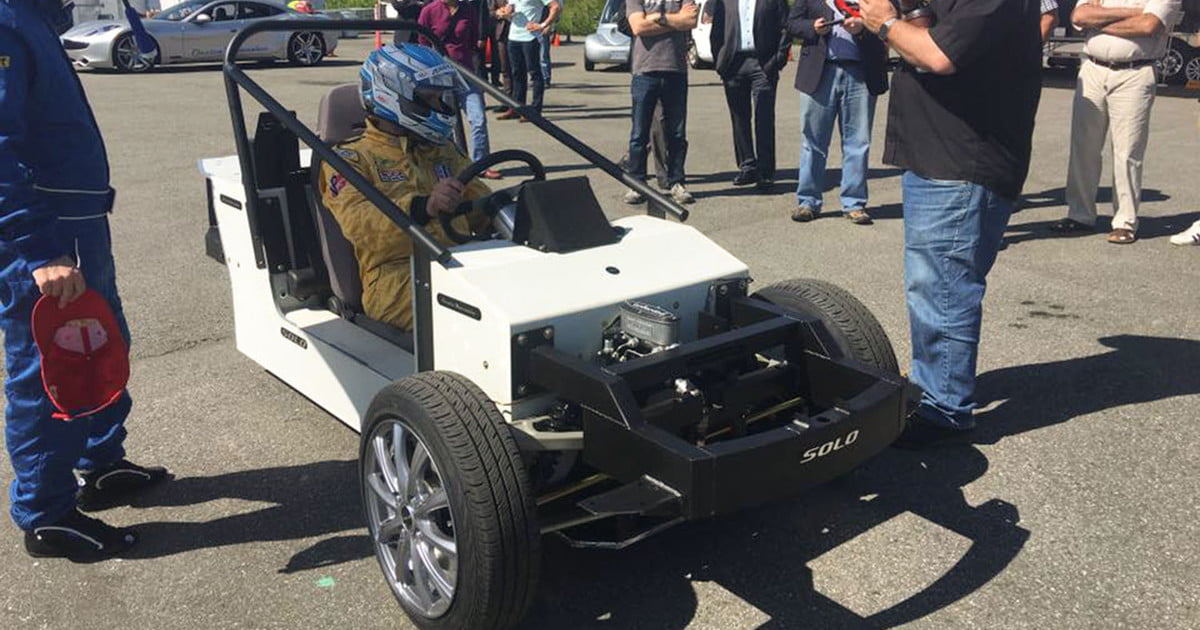 How would you like to reduce your carbon footprint to a carbon fingerprint and have a whole lot of fun at the same time? The first, the fingerprint part, is Electra Meccanica‘s claim for the 2017 Solo. The 3-wheel, single-occupant electric car goes on sale September 9, 2016, in Canada and the U.S., according to Electrek. If the 3-wheeler was used for commuting, Electra Meccanica estimates an owner would save approximately 91 percent on fuel costs. You can pre-order now at the Electra Meccanica’s website.

There’s a 285-liter trunk storage compartment, which translates to about 10 cubic feet. For comparison, that’s more than twice as large as a Miata’s trunk (4.6 cubic feet) but a little smaller than a Mustang convertible’s (11.4 cubic feet).

With list prices set at $19,888 Canadian and $15,150 U.S., the single-seater Solo is an inexpensive all-electric car — or a fairly costly enclosed 3-wheel motorcycle with no accommodation for a passenger.

Whether the Solo is classified as a car, a motorcycle, or something in between will vary from state to state in the U.S. In North Carolina, for example, the Solo would be considered an “autocycle.”

Vehicle classification raises several issues. Will the 3-wheeler be OK to drive with a regular driver’s license or will a motorcycle endorsement be necessary, and if so, will a helmet be mandatory if required in the state for motorcycle riders? How will the vehicle be insured? Also, as an electric vehicle, will it qualify for federal tax credits as a car or as a motorcycle?

The U.S. National Highway Traffic Safety Administration has had a classification rule change for certain three-wheeled vehicles in the proposal stage since 2013, but no action has been taken and it is not in the NHTSA’s Regulatory Plan. The NHTSA’s concern is that drivers in an enclosed vehicle that hasn’t passed crash tests and has no airbags will assume the Solo has the same safety features and crash protection as passenger cars certified to federal safety standards.