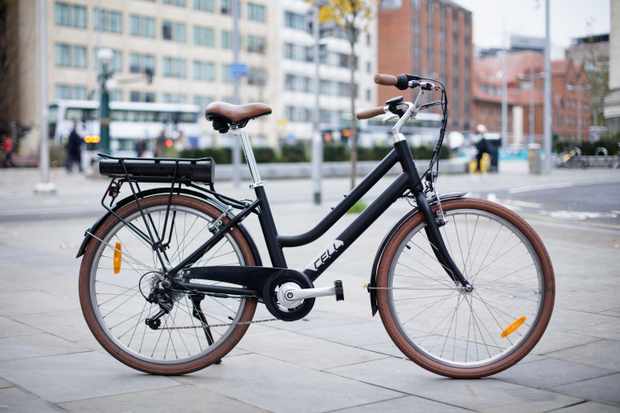 The Cell Ultimo 1.0 is an AU$999 electric town bike that is due to be sold in Aldi stores in Australia from the 14th December 2019.

I have had the chance to ride the bike for the past few months and its super-relaxed and predictable ride quality — and value-for-money spec — has seriously impressed me.

The bike is currently only available in Aldi stores in Australia but there are plans to potentially bring it to the UK.

The Ultimo 1.0 comes in two styles – a traditional triple triangle layout and a low-slung, step-through style. Each style comes in one size.

I spent the majority of my time on the step-through style bike and, out of the box, it is pretty much good to go – all you need to do is charge the battery, twist the bars, fit the saddle and fit the front wheel. 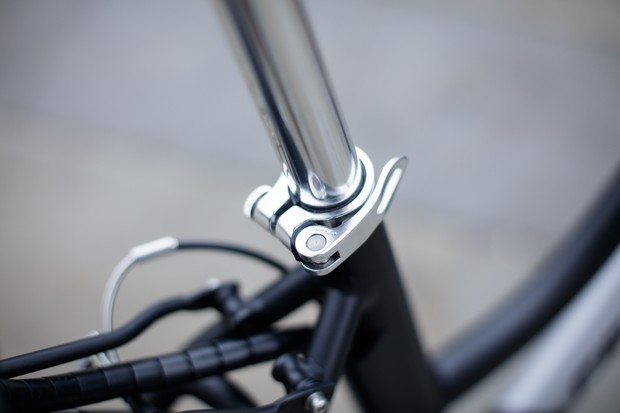 I am just shy of 6ft tall (182 cm) and my partner is around 5ft 3in tall (160 cm). The cockpit and seatpost both had a sufficient range of adjustment to accommodate our very different builds.

A quick-release seatpost makes for easy height adjustments, while I also appreciated that the bike is designed around a traditional quill stem – this gives a greater range of height adjustments than a typical a-head setup. It is also easier to adjust.

Sitting atop this stem is a comfortable swept-back handlebar with generous rise. This puts you in a delightfully upright position but doesn’t sacrifice much in terms of control. 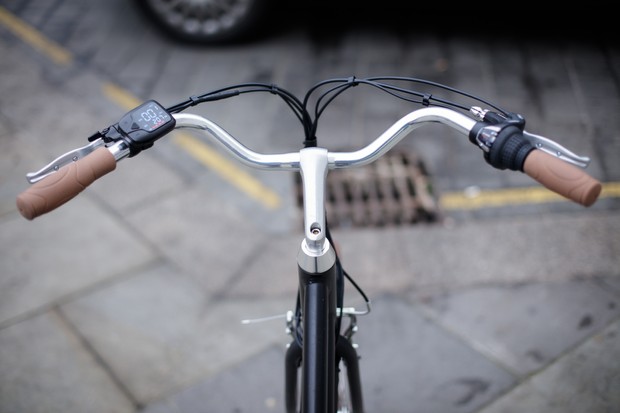 The handlebar puts you in a wonderfully upright position. Simon Bromley / Immediate Media

The ride of the bike is incredibly predictable and stable. Riding no hands is weirdly easy and I experienced no speed wobbles or other unpleasantness. This combined with the upright position and assistance makes for a delightfully relaxing ride.

The ride is also very comfortable. The chunky 1.95in-wide tyres definitely help but a (welcome) touch of flex in the bars and stem also contributes to this.

The bike rolls on 26in wheels. These are built with wide 36-spoke rims laced to basic 15mm nutted hubs. The hubs were a bit dry out of the box and would benefit from a generous application of grease if you live in a wet climate and plan on riding the bike year-round. 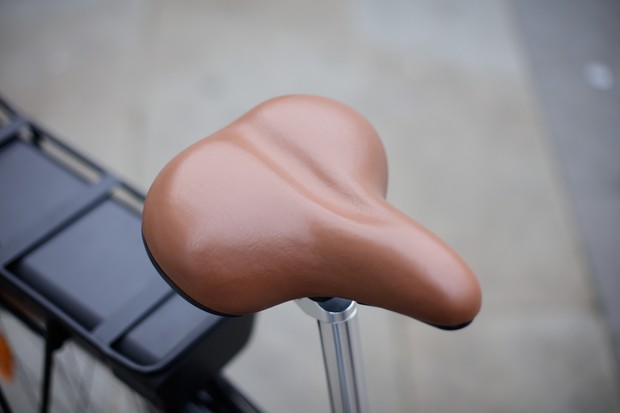 The saddle is all that really lets the bike down in terms of comfort.

It’s what I would describe as a crowd-pleaser. At the risk of making broad generalisations, I suspect the bike’s inoffensive, wide and very, very squishy saddle has been specced to appeal to casual buyers who would be put off by a narrower and firmer, but more practical, saddle.

This is a real shame as it’s the only truly frustrating thing about the bike. As with all super-soft saddles, after only a few minutes of riding, the saddle consumes your peachy bot in a most uncomfortable way, causing chafing on the groin and inner thighs. 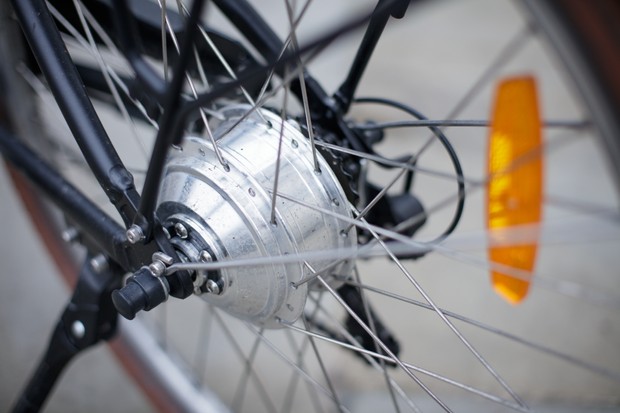 The motor has more than enough oomph to scoot you about even the steepest locales. Simon Bromley / Immediate Media

The Ultimo is built around an Entity E200 hub-based motor system.

In the most powerful setting, the 250w system has more than enough oomph to, if you so wish, power up even steep inclines with minimal effort.

The level of assistance is more reasonable in the lower-powered modes and settings are easily switched using the simple bar-mounted controller.

While there’s sufficient power on tap, delivery is a little binary and could do with refinement.

This is primarily as the sensor is purely cadence-based. There’s little finesse in how the motor delivers power and it feels as though it wants to get you up to the limit as quickly as possible, rather than more naturally matching your own input.

As there is no torque meter, a slight twitch of the cranks is also enough to surge you forward. This can be quite unnerving at junctions but you quickly learn to feather the brakes (which have a cut-off switch) to stop this. 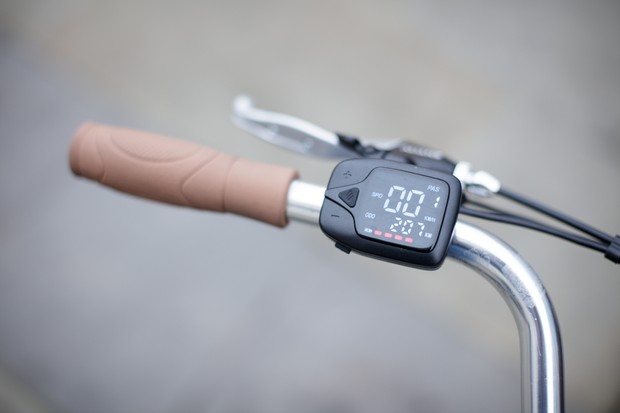 The bike’s controller is refreshingly easy to use. Simon Bromley / Immediate Media

The bar-mounted unit has four buttons to control the bike’s various functions – two large buttons control the overall power and the other two smaller buttons allow you to cycle through screens and control the lights.

Holding down the lower power control button activates the Ultimo’s walk function and I found this more useful than I expected. As the motor is hub-based (rather than crank-based), you don’t have to avoid rotating pedals when using this.

The battery lives beneath the top deck of the rear rack and is removable. On three occasions, I got close to 49km of range out of each full charge. This is pretty much bang on Cell’s claim of 50km per charge, so hats off for accuracy here.

This figure was achieved while dragging my 70kg mass around Bristol’s typically vertiginous landscape.

This isn’t a groundbreaking range but it’s also pretty damn good for an AU$999 bike and should be sufficient for the majority of commutes.

On that note, the bike ships with full cover mudguards, front and rear lights, and a rear rack as standard. This is an impressively comprehensive package of accessories for a bike of this price and makes it perfect for year-round commuting straight out of the box. 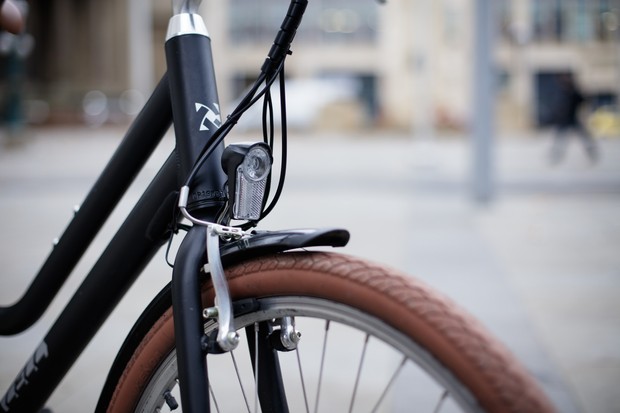 The headlight makes the absolute most of the power available. Simon Bromley / Immediate Media

As is common with town bikes, the rear light is attached to the rack and removing it would take a concerted effort, so thieves are unlikely to take interest in this shiny trinket.

The headlight is mounted to the fork crown. This is the optimal placement for a front light and the power on tap is sufficient to light the way on unlit streets. It’s no lumen bazooka, but the beam is well-shaped and makes the most of the power available.

The bike also has a kickstand. It’s been ages since I have used a bike with a kickstand and this reminded me of just how useful they are.

If I was being really picky, I wish the mudguards extended slightly further, or were fitted with mudflaps, to reduce errant spray in truly wet conditions. 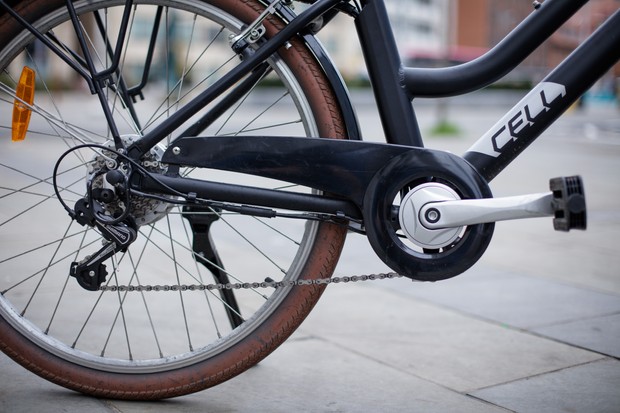 This bike has reminded me of how much I love kick stands and chain cases. Simon Bromley / Immediate Media

The Ultimo is built around a 7-speed Shimano Altus drivetrain in a 1x layout. This is enclosed within a chaincase, so trousers can be left unrolled on your commute.

This drivetrain gave adequate range when powered but, on the few occasions I ran out of power, I was left a little over-geared. Not running out of charge would be my recommendation…

V-brakes would never be my first choice for an urban bike but, if well set up, they offer more than enough power to control even a heavily loaded bike. As an aside, I appreciated the cute little bell that is integrated into the left-hand brake lever. 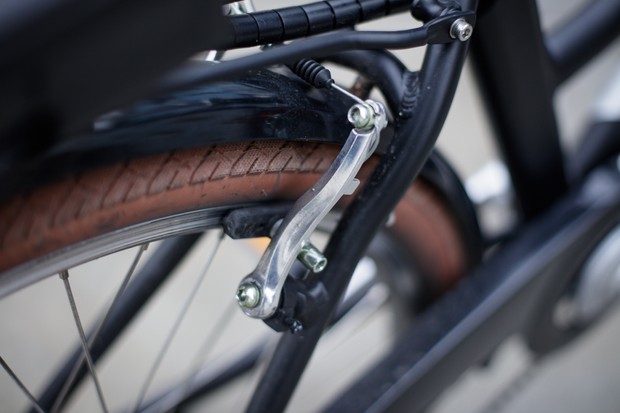 The V-brakes have more than enough power on tap.

Barring a few small niggles – which are almost to be expected of a bike of this price – the Ultimo is a truly capable and very affordable introduction into the world of e-bikes, and it will be the perfect commuter or weekend cruiser for those that want a helping hand.

Should this bike make the jump to the Northern Hemisphere and into UK – which, according to Cell, is a distinct possibility – I suspect this will be a wildly popular bike.